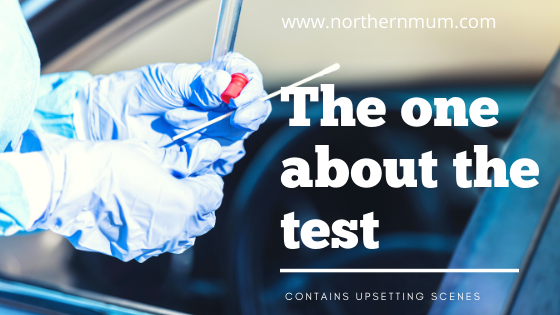 Did I ever tell you about the time we took a family excursion for a Covid test?

It was before Christmas, and in between lockdowns, when we had a sniffle.  I’ll be honest, it was no more than that, but the media has whipped us into a frantic, swirling, chaotic circle of crisis and I deemed it was necessary to check that we did not have Covid 19.

Plus we hadn’t been anywhere together as a family for eternity….

We pulled up to the site, and the first thing to highlight is the heavily masked up fella at the gate definitely seemed to have a twinkle in his eye when it came to me.  He flirtatiously used hand gestures to advise me to slowly, seductively wind down the window.  Then in a quiet, but dominant tone,  he asked me to mask up.  It was like a scene with 50 shades of grey, but with a car and children in play – so somewhat different..

I placed on my mask, and the children, who I had all but forgotten were in the car followed suit.

I cursed myself slightly later when I realised my  mask of choice was one that had been decorated by my youngest. It looked like I was choosing to wear a surgical mask with small aliens bouncing around on it (for those that know – characters from Among Us).

I fear it was at this point the Covid chap started to lose interest.  However, grateful the mask hid my untouched Tier 3 moustache, I still beamed at him from beneath the 3 layers of cotton and couldn’t help but feel mildly disappointed when he waved me on to his colleagues ahead who were in the tent that had been borrowed off the fellas who tried to capture ET in the eighties. 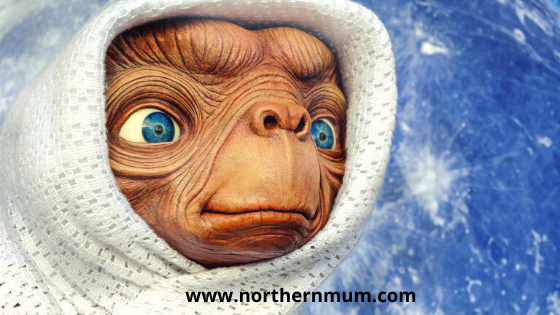 We drove on, the wrong way actually, which I realised when a woman with a clipboard started to gesticulate at me furiously.  Spinning her hands like she was a hula hooper on speed.  The kids turned brighter than the Christmas star when they grasped I had fecked up the one way system, and then started groaning and burying their heads in their palms.

I only have to breathe nowadays to embarrass my teenage twins, so imagine their pain when I actually get something wrong and there is no way they can deny they are with me…..

My mistake was corrected and I reversed, swung my little Hyundai around and trundled off to the tent.  Where a young lad who looked like he had just stepped out of the womb, silently slid four black, rectangular packages through my window into my freshly gloved hands.

“Do not mix up the bags” he squeaked in a voice that was clearly just breaking.

This was the instant cue for the whole family to suddenly drop their package, mix them up and start grabbing at black bags like a seaside claw machine.  My tiny little car started to shake with nervous energy as the man child Covid tester waited for calm to descend.

Calm has not descended on my family since 2006, so I used my non covered eyes to urge him to carry on…

He must have known we were a lost cause, as he simply turned and yelled, “instructions are in the bag, follow them, and flash your hazards if you get stuck.”

Then we were alone again.

In a car the size of a tin can, with three children, two approaching 6 foot, myself and 4 black bags full of medical testing devices.

I made the mistake of uttering the word, “wait”; so the children tore into their bags as if expecting to see a crisp £20 note fall out.

“We will do this together,” I yelled amid the carnage that was threatening to overpower the car.

We all removed the stick….

“Insert to your tonsils, and move it around for twenty seconds.”

We placed the cotton padded stick to the back of our throats and simultaneously began gipping ferociously.  My daughter lurched forward as vomit rose in her abdomen, the sound of which combined with the tickle in the throat made me throw up in my mouth loudly.  My son cried, with a mouthful of cotton wool, “stop it, I’ll puke.”, then continued to make noises that sounded like cyanide had been filtered into the car.

Once again, the car shook like it was an extra on Rita, Bob, and Sue Too.  Elsewhere in the car park, I saw people calmly swabbing their tonsils and sealing their swabber in bags.  In mine, I saw a breakdown on epic levels, smelt nausea and heard noises no mother should endure.

When the retching stopped, I instructed us all to move on to swabbing our noses.

Again, in the car next to me, the gent simply inserted the swab into his nostril, swirled it around a bit, popped it into a test tube, sealed the bag and drove over to the Covid gang.

In our car, it was like pollen season had begun.

Sneezes erupted from us like lava from a volcano. snot flew wildly around my tiny, little vehicle, the scent mixing in with the stench of unfulfilled nausea.  One child nearly swabbed their frontal lobe as she sneezed mid swap and the stick went flying towards her brain.

It was a car of human emotion and human bodily functions.  I could see the Covid gang mentally drawing straws as to whom would be the ones to take our bags away.

With liquid dripping from my nose, and still the taste of regurgitated breakfast in my throat, I weakly cried out, “snap the stick, place in test tube.  Put in bag, remove barcode, do not mix them up.”

Once again, simultaneously we all dropped our pieces of bar coded paper and promptly mixed them up….

Above the noise, and tears from the child who tried to puncture her brain with a cotton bud, I tried to soothe my family; “doesn’t matter if we mix up, if one of us has it; we are all in!”

This merely created more volume, as my lovely family all turned inwards on each other and presented reasons as to why they would not be staying in with the infected if they had a positive result compared to their negative….

As far as day trips go, this one was pretty disappointing.

The car shuffled towards the Covid gang, where we slid our confused black bags back through the window and into my original sweethearts gloved hand.  He no longer had a cheeky glint in his eye after witnessing myself and my family go through most vile bodily reactions barr shitting ourselves; and I accepted this, I wouldn’t want to toss aside the masks and date me after watching what had just occurred in my car.

Even our sniffles had disappeared.

The tests were negative.

So, we all lived happily ever after, in lockdown – again.