With the normality of school suddenly back in full swing and the house is once again in a semi clean state it is hard to believe that the children had a whole six weeks of summer.   Even though the recycling bin is full to bursting with empty bottles and the family home has more crayon marks and hand marks than before I am proud to say I am a survivor and that I enjoyed the time off with the children more than imagined…..

As I am a BOTTOM (bugger off to the office mum) I do cheat the summer holidays, he who helped create them does the leg work and on days of chaos I would often find excuses to work late or start early.  But for the last two weeks of summer I switched on the out of office, gave the blackberry a break and became mum 100%.

Work soon became a distant memory as we travelled the miles from our home to Crantock, an beautiful spot in Cornwall, home to Trevella Park a site we were lucky enough to be reviewing.

The journey wasn’t great but as with all horrible things it soon paled into the background when we (as the Sat Nat told us) arrived at our destination.  Standing at the top of the park waiting to check in all I could see was rolling green hills that gave way to the blueness of sea.  I stood in the afternoon sun taking in the beauty amongst me, quietly ignoring the yells of my three children as they pounded the car in eagerness to get out.

With keys to our three bed caravan firmly in my hand, I released the bairns and they descended onto the camp site with whoops of enthusiasm.  Within seconds twin girl had shed all her clothes and was sporting a swimsuit, Twin Boy was flying through the air on a zip wire and BB was talking merrily to the Owl at Pet’s Corner.  I quickly flung some clothes in wardrobes,   he who helped create them off to the shops for supplies (wine) and slipped myself into my lycra swimsuit, bundled up Twin Boy and BB and joined my eldest in the pool.

My daughter, who forms opinions fast, gurgled from the pool “this is the best holiday ever”.  A high compliment indeed since we had only been on site for thirty minutes.

But it was an oasis of relaxation and time spent being a family.  Trevella is a fantastic location, with immaculate caravans and everything you need on site from a daring adventure park to a more sedate toddler park.  The lovely pets corner where BB visited daily to say hi to Owl, Rabbit and the Birds and the licensed cafe where a mean fry up can be found when you don’t want to cook anymore.  Not forgetting the crazy golf course at 20p per game!

We had days on the beach, days out at farms and only one trip to A&E when BB had a pulled elbow that thankfully reattached just before X-ray leaving me a little mortified as she swung her arm round her head like a lasso as the nurse tried to image it.  Don’t misinterpretate me here; we didn’t want her to have a dislocated arm but it would have been less embarrassing if she could have continued to not be able to move it until after the X Ray.

We visited Dairyland farm where BB rode her first horsey, once again tears sprung to my eyes as the all too recent memory of her time in spica came to mind and I marvelled once more how far she had come.  We met Peppa at Crealy, and we enjoyed the park so much we went twice which is testimony in itself, and we had lovely days out at Paradise Park, Lappa Valley Railway and the Aquarium.

Our best days were spent crabbing by the shore, my elder two delighted in trying to catch anything with a pulse and laughed till they cried when Twin Girl successful snagged an old fisherman’s net.  We ate fish and chips by the sea watching the crowds go by and we were happy in unison.

There were some surprises along the way, mid way through the holiday following the morning in A&E we were greeted by two mystery guests.  As we sat on the beach eating pasties and building castles Twin girl suddenly leapt from her perch and cried “nanny” and true enough my parents were walking towards us following a five hour drive to surprise us.  Twin Girl’s dream holiday suddenly improved even more and the kids delighted in telling their grandparents what we had been doing and what they would be doing next.

A couple of days later my parents went home and we concluded the holiday again on our own whilst also catching up with friends from University and finally meeting each other children which was a pleasure all in itself.

Trevella was in the heart of everything, a stones through from a beautiful, child friendly beach and close to all the attractions, we had ten wonderful days there but still feel there is so much more to see and do in the fabulous county of Cornwall.

So much so we are going back next year….

A huge thanks to Trevella for having us and giving my children the ‘best holiday ever!’

Trevella is a beautiful campsite/caravan site based in Crantock just outside of Newquay, They offer a range of accommodation from luxury caravans to safari tents if you fancy glamping or simply book a pitch and turn up with a tent.  They have excellent children’s facilities with a heated pool, play areas and a games room and pets corner.  For the keen fishermen Trevella is also host to two well stocked fishing lakes sitting by the nature reserve.  The whole site is immaculate and the toilets, bathrooms etc have been recently upgraded making Trevella the place to stay when visiting Cornwall.  Typical prices for a three bed caravan for a week in August are approx: £700 although there are discounts on the web page if you book early.  Next year we will be trying out a safari tent… 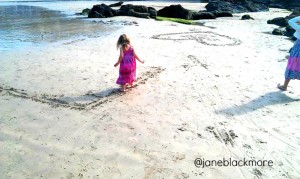